This Means War: A charismatic approach to modern dating 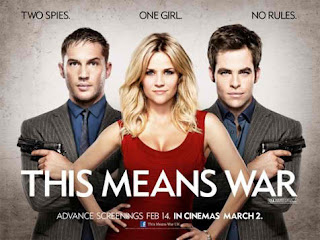 The romantic comedy is one of the more popular genre’s in modern movie making. It mostly appeals to women but every now and then there is a film that comes along and actually unites the sexes like the genre shoulld. This Means War is a charismatic, delightful oddity that effectively blurs the lines of three genres (action, romance, and comedy) to breathe life into a uniquely enjoyable take on modern romance. It’s a film with universal appeal that is one of the few romantic comedies that is an entertaining for men as well as women. The film stars Resse Witherspoon (Water For Elephants), Tom Hardy (The Dark Knight Rises), Chris Pine (Unstoppable), Angela Bassett (Green Lantern), Chelsea Handler (Hop), and Til Schweiger (New Year’s Eve).

﻿
This Means War is an enjoyable, jocular approach to the spy genre as well as the dating game. This romantic comedy that revolves around the story of two CIA agents that are best friends who are competing for the affections of the same woman. The film features two of the hot rising male actors in Hollywood.
Click the link for the full review:
http://www.examiner.com/review/dvd-review-this-means-war-a-charismatic-approach-to-modern-dating?cid=db_articles