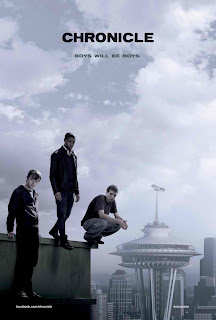 The science fiction genre is a decaying aspect of movie making that is desperately reaching for any spark to re-ignite the passions of sci-fi lovers. One of the trends in modern film making is the implementation of reality based films that attempt to bring a realistic feel to the genre. Chronicle is a reality-based dullard of a film that unfolds in the style of a documentary which follows the story of three teenagers who develop the power of telekinesis. The film is comprised of a cast of unknowns that utilizes the talents of Dane DeHann (Lawless), Alex Russell (Almost Kings), Michael B. Jordan (Red Tails), Michael Kelly (The Adjustment Bureau), and Ashley Hinshaw (LOL).

Telekinesis (definition): The movement of objects by scientifically inexplicable means, the movement of a body caused by thought or willpower without the application of a physical force.
Chronicle is a good concept that was miserably wasted in the attempt to bring a fresh perspective to the science fiction genre. The movie tells the story of three high school kids with very different personalities. The outcast, the popular, and the everyday teen all who encounter a strange meteor and then become endowed with the power of telekinesis. Chronicle is a documentary style type of film that tries to utilize a realistic approach to sci-fi in order to give a fresh perspective to an larger than life concept. The film is a great showcase for how absolute power corrupts
Click the Link:
http://www.examiner.com/review/dvd-review-chronicle-gives-sci-fi-a-bad-name?cid=db_articles﻿
﻿
Posted by Da'Mon at 6:58 AM