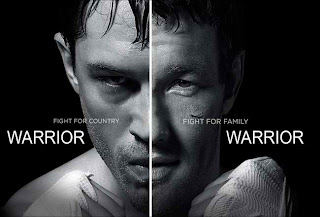 Great sports movies are some of the most rare occurrences in film. They are few that come out and then there are even fewer that are great. But every once in a while a great finds its way to the screen and then captivates the audience. Giving the audience a reason to feel good about life and revel in the accomplishment as if they shared the moment themselves. Warrior is one of those films. Warrior is an engrossing, inspirational spectacle that showcases the emotional journey of a dysfunctional family as it leads to a confrontation of two brothers colliding in the ring of a MMA fight. Its an inside look into the raging phenomena known as MMA. The movie stars Joel Eggelton (The Thing 2011), Tom Hardy (This Means War), Nick Nolte (Warrior), Kurt Angle (Dylan Dog: Dead of Night), Jennifer Morrison (Star Trek 2009), Frank Grillo (The Grey), and Kevin Dunn (Transformers: Dark of the Moon).

Warrior is a phenomenal motion picture event that delves into the fast growing sport of MMA (Mixed Martial Arts) and UFC (Ultimate Fighting Championship). However, Warrior is considerably more than just a film about the modern day gladiators of UFC, it is a terrific, heartwarming tale about overcoming the past and inner demons as well as striving against insurmountable odds.

click the link to read the full review:
http://www.examiner.com/review/dvd-review-warrior-2011
Posted by Da'Mon at 8:48 PM