Hugo: A tender story that is accentuated by great cinematograpy 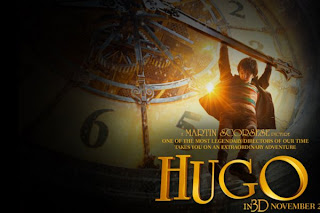 ﻿
Hugo (PG) is a wondrous, imaginative incarnation that creatively intertwines fantastic imagery with great story telling to bring an extremely unique movie going experience. It is a clever mystery that is submerged in a whimsical and enjoyable tale told through the eyes of children. The movie stars Ben Kingsley (Prince of Persia: The Sands of Time), Sasha Baren Cohen (The Dictator), Chloe Grace Moretz (Dark Shadows), Asa Butterfield (The Wolfman), Ray Winestone (Snow White and the Huntsman), Jude Law (Contagion), Emily Mortimer (Our Idiot Brother), and Christopher Lee (The Resident). The film is directed by Martin Scorsese. It was nominated for 11 Academy Awards.

Hugo is an enjoyable, delightful visual extravaganza that immediately whisks the audience into yesteryear. The movie is an interesting commingling of modern film making that is merged with a tender story of forgotten times.. The film uses its fantastic cinematography to accentuate the good themes that it is trying to convey to bring a heartfelt tale to life. Hugo tells the story of a orphan son of a clock maker that takes place in Paris in the 1930‘s. a tale that tells the story of a son that is attempting to hold on to the only connection that he had with his father.

Finsh reading! Click the link:
http://www.examiner.com/review/dvd-review-hugo-a-tender-story-that-is-accentuated-by-great-cinematograpy?cid=db_articles
Posted by Da'Mon at 6:41 AM