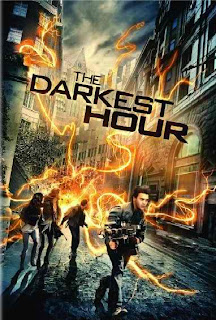 The science fiction genre is almost an endangered species in film making. There are so few science fiction films that debut in modern film making and even fewer of them can be considered a great one. In the modern era of film making, there are so many lackluster films that sci-fi lovers can allow their inner geek to be revealed and fall in love. One of the more recent attempts to revive the genre recently debuted on video. The Darkest Hour (2011) is an insanely mundane intersection of action and sci-fi that makes a painstakingly modest attempt to give a modern perspective on the often told, end of the world sci-fi narrative. This mismanaged thriller revolves around the events that bind a mismatched band of travelers who are thrown together by the dire circumstances of the horrific occurrence. The movie stars Emile Hursch (Milk), Olivia Thirlby (Being Flynn), Max Minghellay (The Ides of March), and Rachel Taylor (Transformers).


The Darkest Hour is an exhausting misuse of a good premise. It is highlighted by some exceptional cinematography and the implementation of first rate special effects. This is a moderately entertaining sci-fi themed testament of fortitude and human resolve. It bolsters an intriguing concept and good usage of the often told story of alien invasion. This is a very unique perspectives on the last stand of mankind against an alien incursion.
Click the link for the full review:
http://www.examiner.com/review/dvd-review-the-darkest-hour-2011-great-special-effects-bad-movie