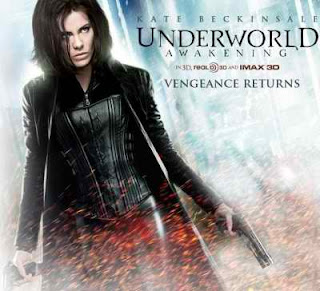 The Underworld franchise is one of the most unique series of films in movie history. Not only does it make use of a pair of classic characters, it manages to successfully incorporate the characters with a modern perspective as well as the implementation of a female action star as the lead. Kate Beckinsdale’s masterful depiction of the Death Dealing vampire Selene has captivated her to cult movie status as well as becoming one of the greatest female heroines to ever grace the silver screen. Underworld: Awakening marks the fourth film in the franchise and in the process returns Beckinsdale to her best role as the star of the franchise. The film stars Kate Beckinsdale (Contraband), Stephen Rea (Blackthorn), Michael Ealy (Takers), Theo James (The Inbetweeners), India Eisley (Headspace), and Kris Holden-Ried (Textuality).

Underworld: Awakening is action packed, highly anticipated fourth iteration that continues the creative implementation of a modern perspective on the usage of a pair of the most legendary characters in folk lore. Just like the prior films in the franchise, this film carries on the age old battle between vampires and werewolves.

Click the link to finish reading:
http://www.examiner.com/review/dvd-review-underworld-awakening-the-death-dealer-returns﻿
Posted by Da'Mon at 6:33 AM