Sherlock Holmes: Game of Shadows: A paradox of entertainment 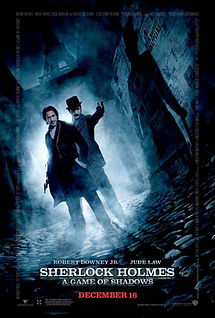 From out of the pages and onto the big screen, one of the oldest crime fighters makes his long awaited return to the silver screen. Sherlock Holmes makes his return in the follow up to the 2009 film, Sherlock Holmes. The film returns Robert Downey, Jr. (Marvel Comics The Avengers), Jude Law (Contagion), Rachael McAdams (Midnight In Paris), and Eddie Marsan (The Disappearance of Alice Creed), Noomi Rapace (Prometheus), Jared Harris (The Ward), and Stephen Fry (Alice in Wonderland).


Sherlock Holmes: A Game of Shadows is an enjoyable convergence of history, action, and entertainment. The film features a creative commingling of a multitude of elements such as comedy, mystery, and suspense which are embedded into this enjoyable tale. The movie is the best interpretation of the classic character that was created by Sir Arthur Conan Doyle.
click:
http://www.examiner.com/review/dvd-review-sherlock-holmes-game-of-shadows-a-paradox-of-entertainment﻿
﻿
Posted by Da'Mon at 6:48 AM