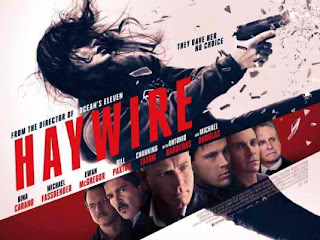 The female action star is an extremely rare breed in Hollywood. There are a very minuscule number of female action stars and there are even fewer that can actually carry a movie. In addition, there are even fewer who look believable when doing it. Hollywood’s short list of feminine action stars is a very exclusive club. Haywire is an incoherent, mismanaged action film that is commingled with a spy/conspiracy thriller. It’s an begrudging chore of viewing that makes a horrid attempt to deliver a new take on the oft told spy/conspiracy story. The movie stars is comprised of an all-star talented casts that features the likes of Gina Carano (Blood and Bone), Micheal Fassbinder (X-Men: First Class), Ewan McGregor (The Ghost Writer), Bill Paxton (The Good Life), Channing Tatum (21 Jump Street), Antonio Banderas (Puss In Boots), and Michael Douglass (Wall Street: Money Never Sleeps). It is directed by Steven Soderbergh (Contagion). ﻿

Haywire is a mangled, dreary catastrophe that offers nearly no level of satisfaction. It’s greatest attribute is the introduction of a new female action star, Gina Carano. The film is stocked with an all star cast that it never truly utilizes
Click the link for the full review:
http://www.examiner.com/review/dvd-review-haywire-a-sad-waste-of-great-action-sequences