Puss In Boots: Another great hit from Dreamworks 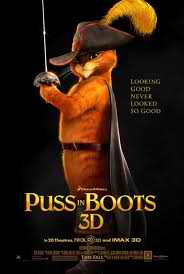 ﻿
In recent years, animated films have catered to the adult audience as much as the younger audience. Films like Toy Story, The Incredibles, and Shrek have as much entertainment for the adult portion of its viewers as it does for those that you would intend is the target audience. The comedic aspect that comprises these films are mostly adult focused. After four films and finally ending the Shrek franchise, Dreamworks uses one of the stars of the franchise to tell a new adventure. Puss In Boots is the first spin-off from the immensely popular and mega successful franchise. This movie features the former sidekick, Puss in his first solo adventure. The film features the voice talents of Antonio Bandaras (Haywire), Selma Hayek (Cirque Du Freak: The Vampire Assistant), Zach Galfinikas (The Hangover Part 2), Billy Bob Thornton (Faster), and Amy Sedaris (Elf).


Puss In Boots is an imaginative, humorously entertaining romp of the misadventures of the beloved Spanish feline that creatively pokes fun at the outlaw genre as Dreamworks studios attempts to capitalize on one of the former stars of the Shrek franchise. “Puss” takes center stage in this enjoyable tale of thievery and the love of Leche. It’s feline misadventure at its unwavering best. The film is a combination of wild west adventure, comedy, and fairy tale story telling. Its an animated satire of many of wild west stories such as Zorro.

Click the link for the full review:
http://www.examiner.com/review/dvd-review-puss-boots-another-great-hit-from-dreamworks
Posted by Da'Mon at 8:38 PM